A. INTRODUCTION TO THE AUDIENCE EXPERIENCE: Mark Petrakis

Though every audience is unique, their reasons for gathering are generally very similar: to experience something collective in scope, and yet something personal in meaning. The desire to give and to receive motivates both sides of the conversation. In many ways, audiences function much like a receiver set; to which the artist serves as a transmitter. 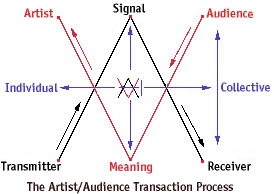 Simple enough it would seem, but who is to say that what an artist transmits is received by the audience as it was intended. Just because you speak doesn’t mean you are understood. An audience does not simply accept what is presented. It must craft its own response. It does so first by scanning the signal for its concealed meanings. If they are found in sufficient number, the audience proceeds. If they are not, the audience gives up in frustration and lapses into boredom. If the signal is translated successfully though, then the audience is free as a group to give back to the artist — to return the signal, to fulfill the transaction, to confirm that the job is being done. That is the classic form of interactivity, and I would go so far as to say that the pattern holds true for any live audience and for any artist who comes before them seeking their time and attention.

But what about art that doesn’t fit into the traditional performance model? What about mechanical or sculptural art, electronic or networked, interactive or telepresent art? The range of variations is endless. What matters more than definitions however is the nature of the transactions that occur. Having the audience networked but not physically present, or by some other means geographically or temporally displaced, does not negate the primacy of the transaction process, so much as it rearranges the variables by which the transaction is accomplished.

Different art calls for different responses. An audience, just like an artist, must play many roles, each with a different focus. Spectacles call for spectators, objects for observers, experiences for participants, rituals for celebrants, games for players and meditations for metaphysicians. Still, whatever the form, whatever the role, at some point the transfer of an experience from the artist to the audience becomes essential. Less commonly articulated is the subsequent transfer of the experience from the audience back to the artist, and then horizontally to and from other members of the audience. That broader-banded experience, which I call here the "the many-sided conversation" is one rich with mysterious approaches. And so here, we have chosen to make it our primary focus.

To help me explore this subtle interconnection, I have asked a group of long-time friends and collaborators to address the audience experience from their own unique perspectives. Marcia Crosby is a decorator/designer and a theatrical producer. Ron Davis is an art director and creator of theatrical interactive experiences. Patrick Martin is an illusionist. Steve Durie and Geri Wittig are interactive artists. Abbe Don is an interface designer and interactive storyteller. I will follow that in a spoon summation before asking you to join the conversation at <http://www.ylem.org/AudienceExperience.html>

So, let’s begin the show. As our audience, we invite you to sit back and reconnect with your own personal history in these matters, for our intent is to free us both from a tired history and to join each other inside a new realm of possibilities.